given the incredibly warm February we had this year, i expected to break last years record. But no, March decided to be the new February, and we got several big late march snowstorms.
And the peepers are actually pretty late this year.
But they're finally here. Suck it, winter. You're DONE.

25 years ago, I was still working at a small company in Cambridge called Cybermation. We made CNC machines for the signmaking industry; routers and plasma cutters. We made both the software and the hardware. I worked on the software side. The company is long out of business, but many of the machines are *still* in use today. (google for Cybermation 700A)

It was a small company, only 5 of us doing the design software. I had just on a whim put some code that would allow you to take any geometric path that you defined, and a border, and generate a fractal path on the border using the supplied path as the fractal path.

Needing to test this all the way out to a cut finished part eventually, I made a couple of actual test pieces out of 1/4 and 1/8 acrylic sheet.

It's been over *25 years* since I made this, and maybe 5 years since I got it framed (at Baldwin Hill Art & Framing in Leominster, MA [now in Natick]), and I *finally* mounted it on a wall in the house today.

Better late than never at all. 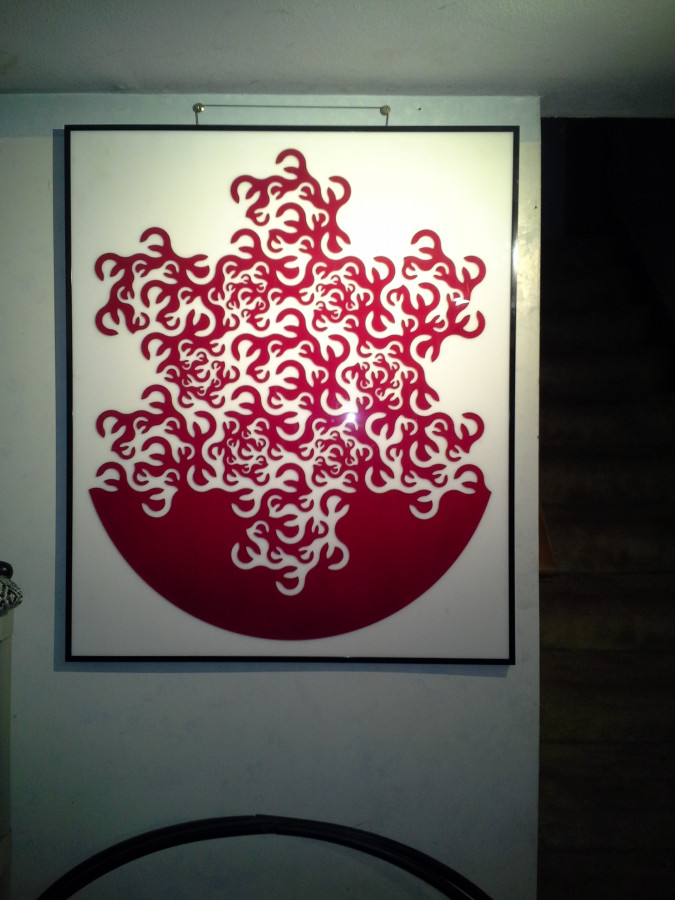 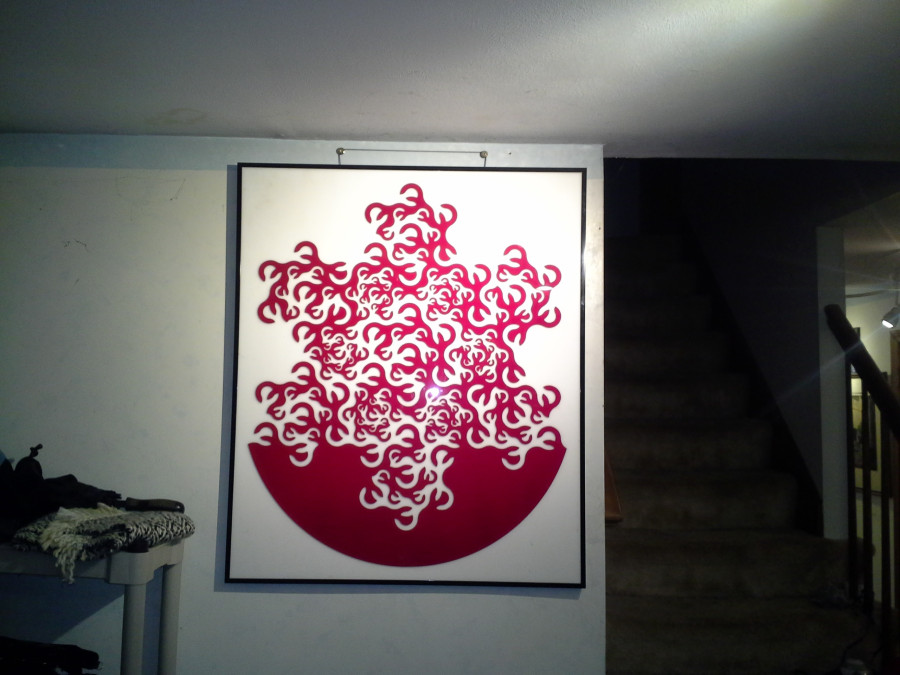 [Apologies to The Chordettes]

So, I have this lathe. Classic South Bend 10K (heavy 10) toolroom lathe. I got it used many years ago, and it has served me very well.
Used tools generally have some sort of idiosyncracies. 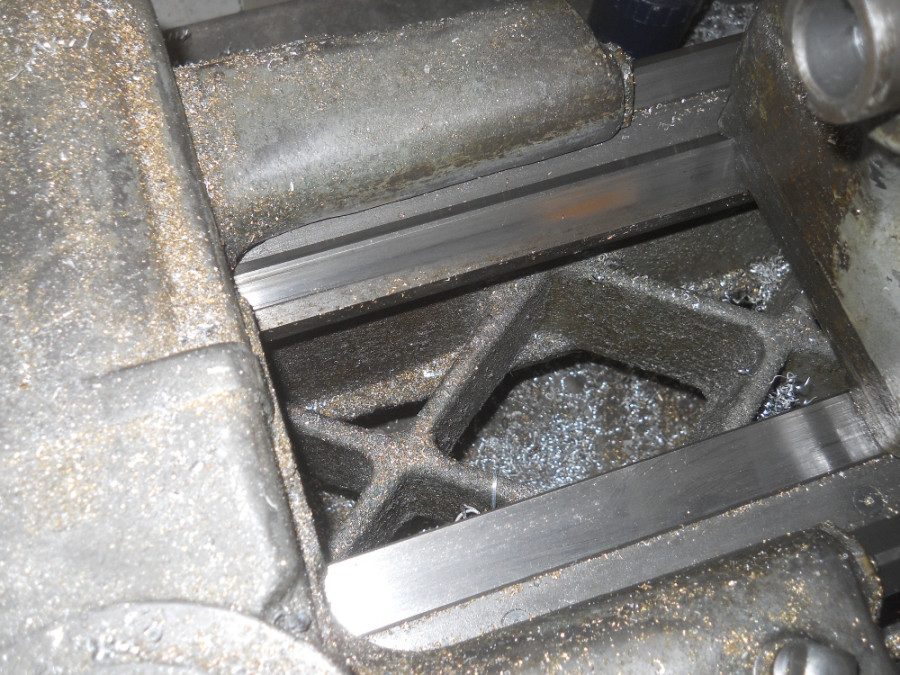 This is the back guide of the lathe carriage. Note that it is slightly tapered. Note the paint sort of worn off on the right side at the bottom. This is because for some reason, this guide would only fit behind the tailstock for about 2 inches of its length, and then would bind against the tailstock. About 2.5 inches of carriage motion which would normallly be available was not usable. While this has never actually stopped me from being able to do a job, it has on occasion made certain jobs very annoying. Unclear as to why the heck it was like this; my best guess is that somewhere in the distant past, someone at the machine shop I got this unit from had removed the original tailstock for some reason, and months later someone else stuck on one from a different model year, which was really *close* to completely compatible but not quite, and the annoyance was never quite enough for *them* to deal with it either. 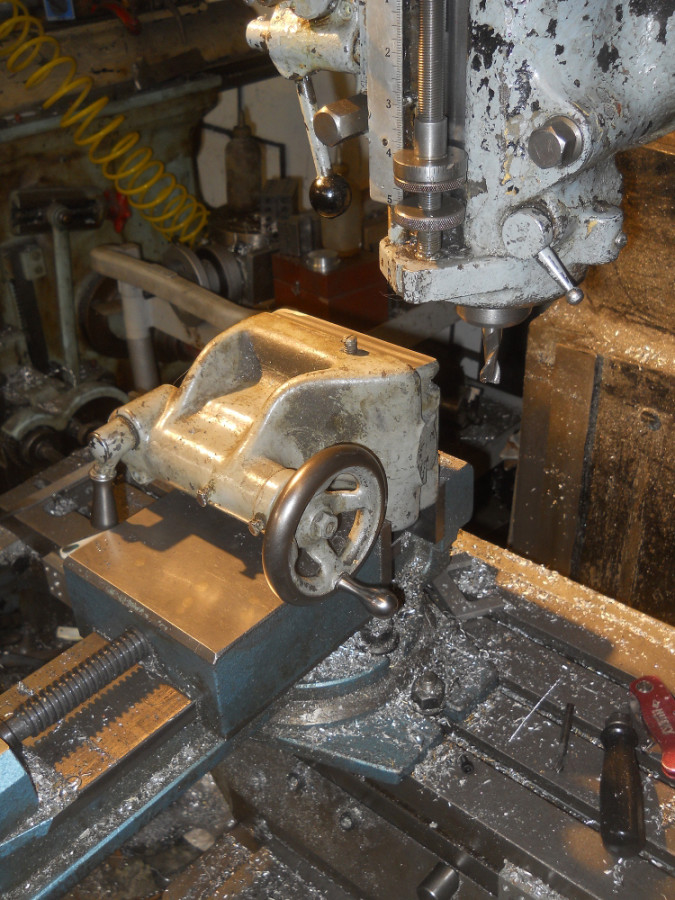 Yep. Thats the lathe tailstock in the Bridgeport vise. 2 minutes of work, and problem finally dealt with. Carriage now has complete range of motion, as it should. Yay! 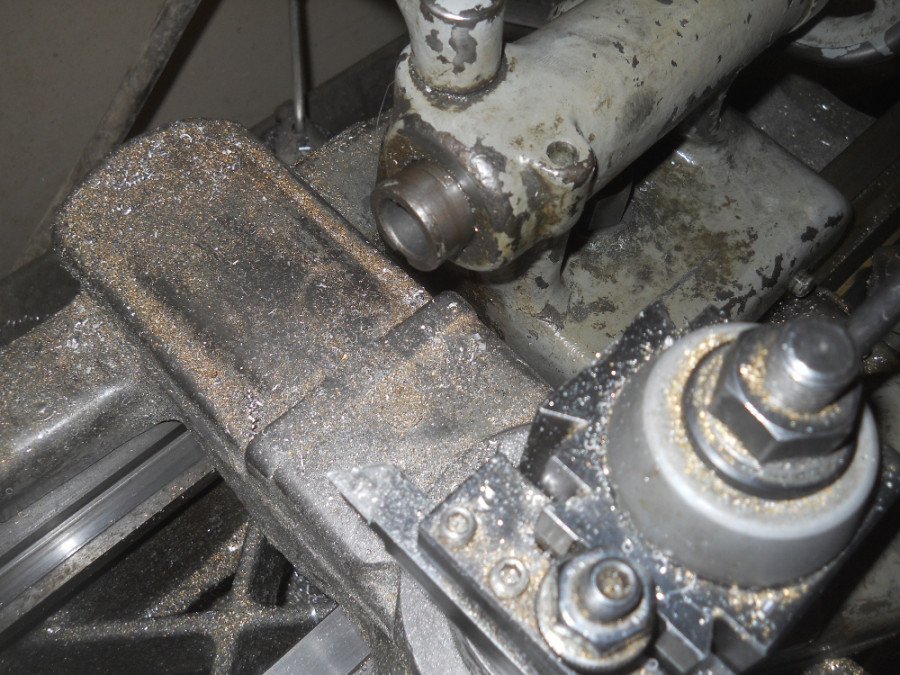 Its raining, and the peepers have come out!

Are there *any* manufacturers out ther that produce a decent room humidifier that will actually last more than 2-3 years before crapping out?

Yay! First print with ABS that didn't warp it's way off the print bed within the first 5 layers.
In fact, it finished, and came out great!

Still in the realm of "black magic" until I can make it happen repeatedly, though. 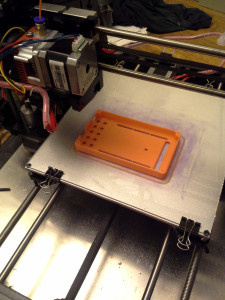 Our friend for the last 17 years, found in a storm drain in Somerville, and made it to us via Kitty Angels in NH. Among other reasons, we chose him specifically because the folk at the shelter told us "He's too timid, If you're looking for a lap cat, this isn't the one, hell just hide and you'll probably never see him."

They we're right, and wrong. The first few weeks, yep, we hardly saw him, and he would manage to cram
himself into the smallest hiding places; We would find him in places we could not fathom how he could have squeezed into. But after the first month or so, he totally changed and decided we were his family.

Somehow, a game of "Spin the Cat" developed, where he would show up to my left leg and wait to be spun around; this eventually "Elevator" forked off from this where he would show up at the *right* leg, and i'd whoosh him up in the air, then back down, while saying "whoosh" or "elevator", and he'd walk away for a few steps then come back for more rides.

He'd run and hide whenever strangers showed up, but was always around for us, eventually being a great lap companion, or hanging out with you while working on the 'puter. As he got older, he became a bit more social around other people.

Took several iterations of increasing security to keep him out of the machine shop; he'd get in there by somehow getting into the basement ceiling joists and tunneling in.

He came from the shelter with the name "bruno" but that just didn't fit.
"Radar" emerged as his true name because when still little, his ears were way bigger than his head and he would rotate them around independently of each other like radar dishes. And surprisingly, it didn't take long before he *knew* his name. We could reliably call for him and he'd come out from wherever he was and find us. Calling out other names or words with the same cadence/tone wouldn't get him; he really seemed to understand the name itself.

He had a good run. Thought he was going to pass back in January, but somehow he rallied and stuck around for a while longer. over the past week, old age, kidney problems, and a large abdominal mass
of some sort finally got him. We took him outside into the backyard grass yesterday. We took him to the vet this morning.

Buried in the backyard next to Tabbytail. Bye Radar. We'll miss you.

The froggies are finally out there singing away! (there may have been a single lonesome one out there last night; not positive) Another late arrival this year, the latest we have ever recorded here in Westford MA.

Also, a nice sunny spring day, not going to drop anywhere near freezing tonight, and more of the same forecast for the next whole week! About F-ing time!

Happiness is a steaming bowl of Borscht with sour cream. That is all.
Collapse